Is the war about to end soon in Syria? This is the view from some observers, scholars and experts on the Middle East, amoung them the political science-professor Hilal Khasan from the American University of Beirut. In a statement to the Lebanese newspaper Daily Star, he argued that “we are entering another phase of the Syrian conflict now. It is nearing its end and now it is necessary to set out zones of influence and draw out the … post-Syria civil war situation…”[1]

In the international media, The Economist is wondering whether the southern front now is quiet and if the so called de-escalation zones will work (see map below)? The Syrian government is now almost controlling the whole western area from the Capital Damascus, the Lebanese borders, up to Homs, Hama, the outskirts of Palmyra and the Mediterranean coast and the Alawite heartland south of Aleppo and the rebel-controlled Idlib. The remaining red spot in the south, which is almost not visible on the map, is the remaining 300 km2 in the Qalamoun-mountains and the area north east of Arsal in Lebanon, where IS are controlling the outskirts of the Lebanese villages of Al-Qaa and Ras-Balbeck.

Hezbollah, the Lebanese, and probably the Syrian army as well, will attack the IS-fighters in the next coming days, in order to gain full control of this area and thus securing the strategic important western parts of Syria, north of Damascus.

The maps of control are being re-written by the day in other parts of Syria. The question is, are we coming to an end of war in Syria?

In the last 12 months, the Syrian army, supported by Hezbollah and Iranian revolutionary guard combatants in the field, has been able to take over the control of Aleppo and gained significant territory east of Damascus (but still instable despite the installation of de-escalation zones) and now, soon, in the region of Qalamoun, on the border to Lebanon. This area has previous been in control by Daesh/IS, Nusra/ Jabhat Fateh al-Sham and rebels from Saraya Ahl al-Sham, founded by ex-militiamen from the Free Syrian Army. In the last days, Hezbollah was able to gain significant victory east of Arsal in Lebanon and in the border area on the Syrian side (Qalamoun) over Nusra/ Jabhat Fateh al-Sham in a battle that only lasted 5 days in the end of July, 2017 with over 150 killed Nusra-militiamen and around 20 Hezbollah-victims. 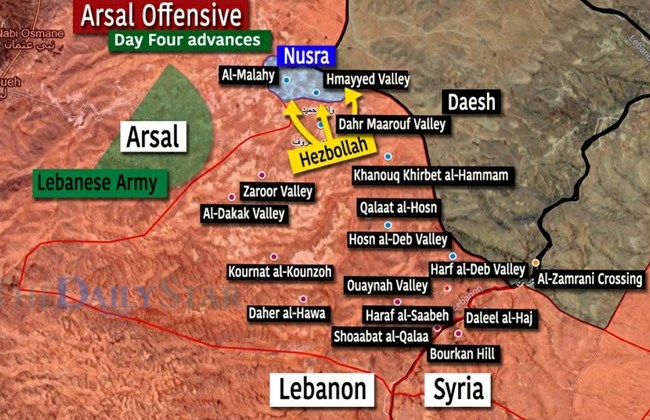 This is drastically changing the map with the areas of control, as it stands right now. An area more than 300km2 in Lebanon and Syria (see the small red dot on the map in (The Economist between Damascus and Homs, see below [2]), north-east of Baalbek had been controlled by Nusra and IS and for the moment, the Lebanese side has agreed a ceasefire in order to evict over 9000 militiamen, their relatives and refugees from on the camps outside of Arsal in an area which has become a warzone since last week (July, 2017).

Around 120 buses, coordinated by the Red Crescent/Red Cross, escorted around 8 000 militants and their families back to Syria as part of the cease-fire agreement on Wednesday, August 2. The buses were divided into five groups and left for the border town of Flita. One group of buses continued to a rebel-held area east of Homs, where mainly Saraya Ahl al-Sham is in control. Another group of buses continued north to Idlib, where Nusra now is in control.  The first phase of the deal was to exchange dead bodies of militiamen from the two sides, the second phase to liberate captured Hezbollah-militiamen in Syria in exchange for Nusra-prisoners in Lebanon jails.

The third phase was to give free passage to the local Nusra-commander Abu Mallek al-Talli, his remaining fighters and their family members. He has also demanded free-passage to Idlib (some reports say Turkey) with his belonging which included a reported 30 million USD in ransom-money from kidnappings during the Syrian war. Among those who were kidnapped in the area in 2013 were the two Swedish journalists Magnus Falkehed och Niclas Hammarström (released after over 50 days of capture in January 2014).[3] The three militia groups controlling this border area opted for three different strategies when Hezbollah and the Lebanese army decided to start the campaign to take control over these rebel-controlled areas. The biggest group Saraya Ahl al-Sham, was formed by mainly former Free Syrian Army-combatants, and had in July 2017 around 800 men in the area. They are considered a “moderate” rebel group and they opted for an early cease-fire and to lay down their weapons when Hezbollah gave them the ultimatum to withdraw. Nusra’s commander was ready to withdraw with his men (around 400 before the fighting started), but he also wanted free-passage to Idlib, with his arms, his men and all the assets on the ground, including the cash gathered during the years in ransom money (see above). The fighting that occurred in the area from July 22-26 was against Nusra, with a ceasefire on July 26, which is holding until now.

After Hezbollah gained full control, the next phase of this war will be the remaining part controlled by the IS, currently with at least 250 combatants in the hills between Arsal and Al Qaa. With this it could be stated that the Syrian war has spilled over to Lebanon, which in itself is very serious. However, as things remain right now on the ground, the IS is surrounded by the Lebanese army, Hezbollah and the Syrian army and for now contained. There are further complications with up to 370 000 registered Syrian refugees[4] in camps in the area (in the Beqaa-valley), where the Lebanese army is controlling the land between the camps and the IS. This area is mainly Sunni, which considerable Christian populations in villages such as Al-Qaa and surrounded by a majority Shia-presence in the Beqaa-valley.

From Lebanon, the Lebanese governmental officials are pressing for a quick and speedy return of the Syrian refugees in Syria, currently almost 1.1 million according the latest figures by UNHCR. There are probably more, as the Lebanese government is demanding that the registrations will cease. UNHCR is not considering the return of around 8 000 Syrians (civilians and combatants) from Arsal as a return of refugees, as the return of refugees should be “individual decisions, based on objective information about the conditions in the place of return, and made free from undue pressure” (Daily Star, August 3). The fight against IS in this area will start in the next coming days, probably where the Lebanese army for the first time will enter into the Syrian war, but reducing their attacks to the Lebanese side of the border. Hezbollah and the Syrian army will attack from the other side. The whole situation is very delicate as the area is full of refugee camps and vulnerable civilians.

At the same time, Russia is announcing “safe-zones” north of Homs. If the border-area of Arsal and Qalamoun will be cleared, the intention is to secure the road from Damascus to Homs and further on to Aleppo with security/buffert zones around the highway, as well as de-escalation zones in the Homs area. The Russians are now even deploying military police on the ground, with check points and several observation points. Another de-escalation zone has been announced south of Damascus, bordering the Golan Heighs and Jordan. According to reports from Syrians on the ground, I have been told that the Syrian army is advancing in the Deir ex-Zor-area (controlled by the IS) from the southern side, and will also attack the IS easter of Palmyra. They are confident that they will take back areas previously lost, as the IS is losing on the ground. The question is who will control key strategic places such as Deir ez-Zor, where the oil production is being concentrated:

On a final note, there are lots of speculations about zones of interests, areas of control, division of Syria into states or confessional entities with autonomous confessional control. I’m attaching one of those maps arguing for a partition or division plan of post-war Syria into five “states”, namely:

It’s interesting to compare this map with the current map of “Areas of control”, see above. Would Turkey allow a Kurdish state to be formed in Syria? Why should it be reduced to the areas of north-east when Kurdish Peshmerga has gained territory all the way to Raqqa and controlling most parts of the border to Turkey? Would really Turkey withdraw from their areas of concern and help to establish a Sunni-dominated “Aleppo state”? Who would control a future Damascus state? Why would the current regime cease their central powers and withdraw to the Alawite heartland in south-western Syria? The conclusion is that this map of “five Syrian states” is neither realistic nor viable, as things are changing on the ground. A better inter-active map is showing the current status day-by day on the following site: http://syriancivilwarmap.com/

This map shows the dynamics of control and movements on the ground. The Syrian governmental forces are starting to control parts of the borders to Jordan and Iraq again. One of the probable most important battle-grounds will take place between the de-facto autonomous region of Rojava, supported by the US with their peshermga-fighers, backed up by Assyrian/Syriaq combatants against the Syrian government/Hezbollah/Iran/Russia on one front (mainly from the south) and Turkey from the north. This is also an area that already produced a big numbers of Kurdish and Christian refugees (majority Assyrian/Syriaqs) to mainly Sweden, in the past, even before the war in Syria.

The battle for central and northern Syria has just started and the maps are being re-drawn by the day. The war in Syria is not to be finished soon.